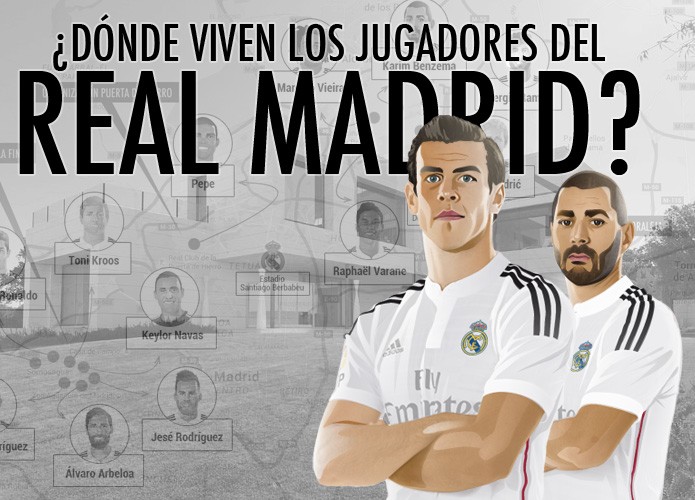 INFOGRAPHIC: WHERE ARE THE LUXURY HOMES OF REAL MADRID PLAYERS?

We have included an infographic prepared by our Madrid office team indicating the locations of the homes of Real Madrid players. You can see where each player lives and some interesting information about the homes of these “galacticos”. At Promora, we have been advising and assisting Real Madrid players to find their ideal homes for years. Renowned star players, such as David Beckham or Ronaldo Luís Nazário de Lima entrusted Promora with the task of finding their homes in Madrid.

They are famous, sought-after by the press, and idols for thousands of people. Real Madrid players generate expectations wherever they go. They even attract our attention in the residential estates where they live, although they try to do just the opposite and go unnoticed. «That isn’t Ronaldo«, «I think that guy in that flashy car is Benzema…» are things people say when they see them in one of the streets of the residential estate or sitting at a table at an outdoor café at a shopping centre.

Most of the Real Madrid players choose the most luxurious and famous residential estates in Madrid: La Moraleja and La Finca. 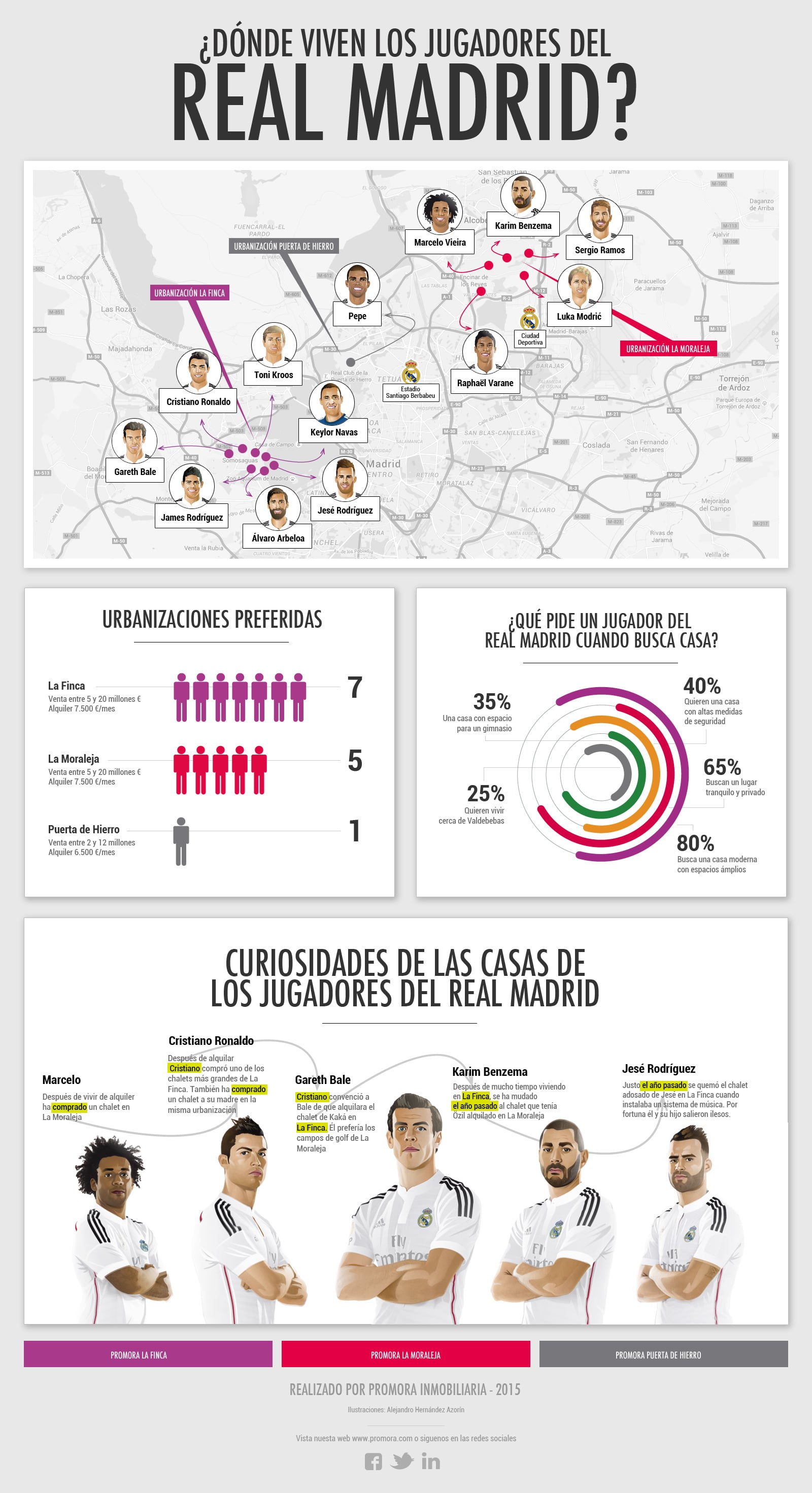 Over the years, La Moraleja, in the north of Madrid, has been the residential estate of choice of Real Madrid players given its proximity to the Training Grounds (Valdebebas), its security, and the privacy of the homes. Ten years ago, most Real Madrid players lived on this residential estate and several former players and managers still have houses here. For example, Christian Panucci bought a villa in the 1990s, Roberto Carlos, Predrag Mijatović, Guus Hiddink and, until recently, David Beckham, who has just sold his villa in La Moraleja to a well-known Spanish businessman.

Some of the players living in La Moraleja are Sergio Ramos, who has just moved into the house he bought a few years ago from the Brazilian player Ronaldo; Marcelo, who owns a villa; Modric recently bought a luxury villa worth more than 2 million euros; Benzema surprisingly rents the same house where Ozil lived when he played for Real Madrid; and finally, the French defender Varane lives in a villa in the El Encinar area.

The type of home Real Madrid players are looking for in La Moraleja tends to be a detached villa with a large garden, and a floor area between 600 and 1,000 square metres, with at least 4 bedrooms (most players, especially foreigners, receive many visits from friends and family members), and that is in perfect condition, since they do not like having to undertake major renovation projects. They are looking for a house that is ready to be occupied. The prices of these properties range from three to ten million euros. Click here to view examples of this type of property.

The La Finca residential estate is in the northeast of Madrid, in Pozuelo, and, in recent years, has become the luxury residential estate where most players reside. They prefer it for two main reasons: the modern architecture of the villas, with spacious rooms and a contemporary style, and the strict security measures to access the area. This is where Ronaldo, Bale, James Rodriguez, Álvaro Arbeloa, Jesé Rodriguez, Keylor Navas and Toni Kroos live. The usually prefer detached villas measuring more than 600 square metres, although some players also live in terraced properties. You can find examples of villas here similar to those owned by Real Madrid players in La Finca.

Most of the players living in La Finca rent their homes. Only Cristiano Ronaldo owns a property. The reason for this is that most players decide to rent a property when they sign up for Real Madrid and then, a year later, once they are sure they will be staying with the club, they decide to buy. The rental prices of these properties are about 7,000 euros a month. See examples of villas for rent.

So, if you ever visit La Moraleja or La Finca, you could run into one of the Real Madrid players at any time.